Bruno Martino is an Italian pianist and singer whose bossa nova song ‘Estate’ is one of the most well-known pieces of the genre. The ballad-like tempo and the long-sounding chords are ideal for getting started with Bossa Nova solo guitar playing.

This arrangement is initially conceived as a rubato piece, i.e. without a continuous rhythmic pulse. This allows the focus to be placed on right hand technique and learning the increasingly complex chords.

The Arrangement For Solo Guitar

This version of Estate is in the key of E minor.

The song begins on the tonic and a contunius with asimple IVm7-V7 cadence (Am7-B7). In bar 7 & 8 Martino feigns an evasion of the tonic antiphon (G major) via the cadence Am7-D13.

In bar 9, however, one is surprisingly greeted by a D minor chord. This in turn is part of the II-V-I cadence to the tonic parallel (Dm-G7-CMaj7).

At this point (bar 12) the first part is at its dramatic and melodic climax and Martino reaches a little deeper into his bag of tricks. The change from major to minor (C-Maj7 to C-Minor9) is at first sight a surprising change in chord quality. In view of the previously indicated evasion to G major, the C minor chord can be interpreted as a minor subdominant of the key of G major. The listening impression confirms this thought. 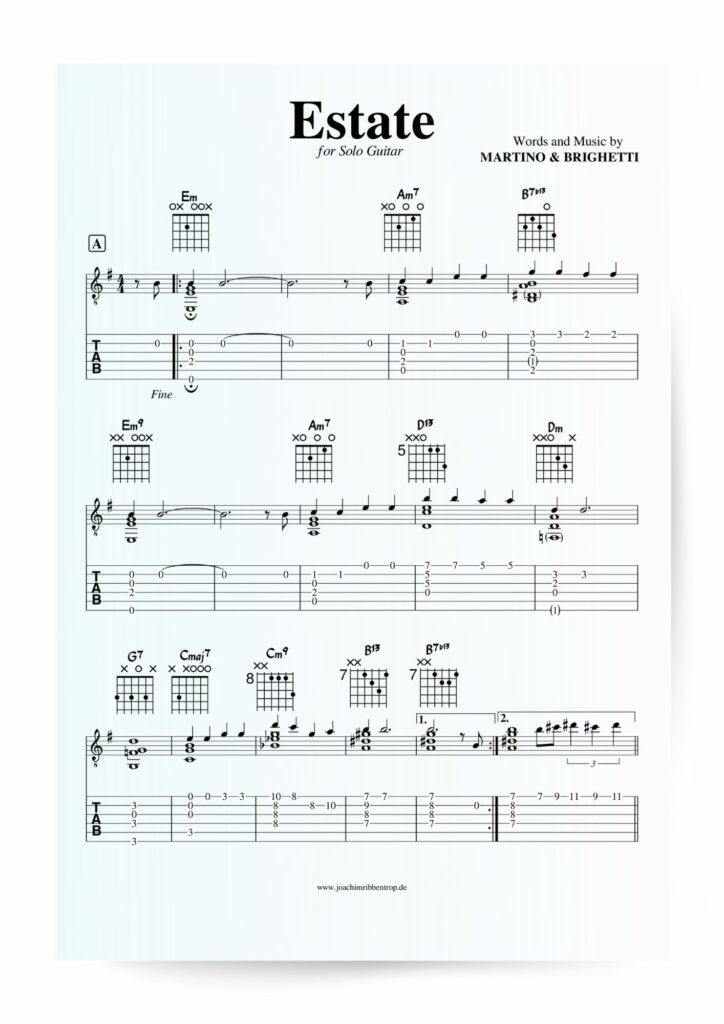 So, right at the climax of the piece, Martino uses a beautiful harmonic concept to support the melody. His return to the tonic via the dominant seventh chord with inner voice leading (optional tone 13 to b13 or G# to G) also testifies to his keen sense of compositional details.